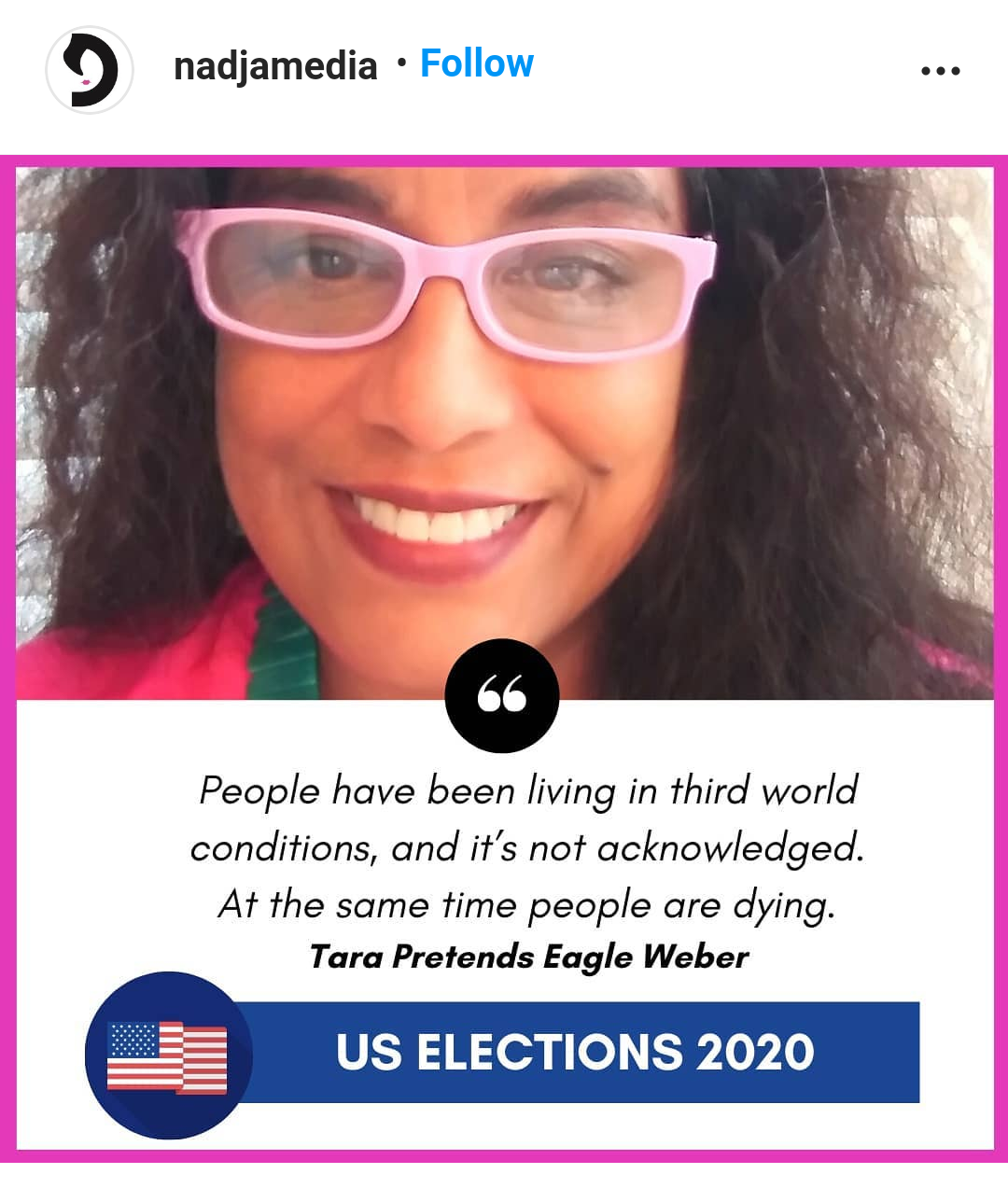 I’m a product of genocide. There are thousands of us, who in the 50s, 60s and 70s were adopted or stolen, and raised by white families in foster care. People from the reservations were relocated, so my biological mum left Standing Rock and ended up in Cleveland. She, along with others, was there under the premise of getting an education and getting a job. But none of those things happened in the way that they hoped. This was a deliberate step. It was devastating to move to a foreign place and not have a job or a place to live, and then not be considered capable of taking care of a child.

This election is a matter of life and death. The pandemic has to get under control. We have an astronomical death rate – it’s up to 228,000 people. Where I live we had a spike on Monday, with teachers and children testing positive. Meanwhile we’re dealing with pre-existing conditions not being covered by healthcare insurance. As a mother of a child with disabilities, it’s often worded in a way that the child with a disability is considered to have a pre-existing condition. For people like us, we’ve been in total lockdown for going on nine months.

President Trump won’t quote the science, or how 100,000 deaths could have been prevented by wearing a mask. I feel like the President himself has been a super spreader, going from place to place with unmasked people in closed areas, doing everything we’re not supposed to do. And he’s supposed to be leading us. The Navajo reservation has been hit by this pandemic in a big way – there have been over 400 deaths there. There was a big delay to getting relief money, and what people don’t realise is that on some reservations there’s no electricity or running water for washing hands, and these are multigenerational homes. I commend Andrew Cuomo, the governor of New York, because he reached out and shared his plan with the leader of the nation, and they went into lockdown which really helped get it under control. But it didn’t come from the leadership that it should have come from.

People have been living in third world conditions, and it’s not acknowledged. At the same time people are dying. So many millions of people have gone into poverty because of Covid.

The President’s administration cut 700,000 people off from food stamps just before this pandemic. There are parking lots filled with lines of people waiting for food.

There was a tent city here in Palm Beach, and then the day after the summer primary it was gone, so there’s a shuffling of serious problems here. We need an immediate stimulus. There’s so much focus from this administration on business and the stock market. We realise that small businesses are being affected, we’re all being affected. But if we don’t take care of the health risks, which comes first – business or healthcare? They’re not equal.

My parents are elderly, and I’ve watched depression set in because it’s terrifying for them, as survivors of the Holocaust, to see that we’re going backwards. We saw this when the police pulled tear gas out onto the Black Lives Matter protesters – our own military against our own people who are expressing their right to peaceful protest. We had our voice and our freedom of speech, but it’s being reigned in now and it’s scary.

In 2020, our lives are in fear because of Covid, but also because of words, who we talk about and who we criticise. I’m raising a young Native American boy, he’s a big guy, with dark brown skin and long hair, and he has autism. We got him an ID and taught him that this isn’t the time to speak out when there’s an officer there. We’d have to do that anyway but in this environment it’s even worse because of all the things we’ve seen happening to men of color when they’re dealing with police and there hasn’t been a crime.

PEOPLE HAVE BEEN LIVING IN THIRD WORLD CONDITIONS, AND IT’S NOT ACKNOWLEDGED.

There’s a deliberate divide in this country along race and gender. In swing states like Texas and Ohio it’s 50-50 between the candidates right now. It’s scary that these states are the ones that are going to determine who wins, because there are people who are going to vote for that divide. They’ve been empowered, their voices of racism have been allowed, and it’s spiraled into carrying guns and forming alt-right groups.

I’m worried that fear will outweigh the hope that we can turn things around. There have been reports of voter intimidation – you’re allowed to carry a concealed weapon here in Florida. And there’s been a call to come out to the polls and intimidate people. But the good thing is that officials are prepared, every campaign has a number to call if this happens. I have concerns about the actual election day. In Palm Beach County we have a large elderly population, and I believe they are going to be key in this election. I don’t want them to feel intimidated if they’re going to vote. That’s the frightening thing, that it’s effective.

During the Obama administration tribal leaders were invited to the White House on a regular basis to discuss the issues. There was a Native American in the White House to directly liaise with, and Obama went to a pow wow at my reservation. The kids there sang for him in our language. It was the first visit to a sovereign, indigenous Native American reservation by a president since the 90s, when Clinton stopped at Pine Ridge in South Dakota. In Turtle Island, across all the Americas, we’re all related – we’ve just been divided by colonialism.

Our South American and Central American indigenous brothers and sisters come here escaping devastating circumstances that the majority of us can’t even understand, though we probably have a better sense now because we’ve lived through such awful things in the last four years. But their children are taken away at the border.

It leaves me speechless because they look like me, and they look like my son. These children have lost their family because there’s no documentation. Genocide has been instilled to keep people out of the country, when Americans are all immigrants themselves. It’s led to these ICE [Immigration and Customs Enforcement] raids so people are living in fear and trying to communicate on the internet to get help, and that’s how some of them are being tracked. It’s the same tactics they used against our people. We grew up outside our culture, and when many of us go back it’s a culture shock. But the resilience of indigenous people is remarkable. Revitalising the language and going back to our ceremonial ways is really beautiful, especially during these difficult times, and when it feels like they’re deliberately trying to destroy us. 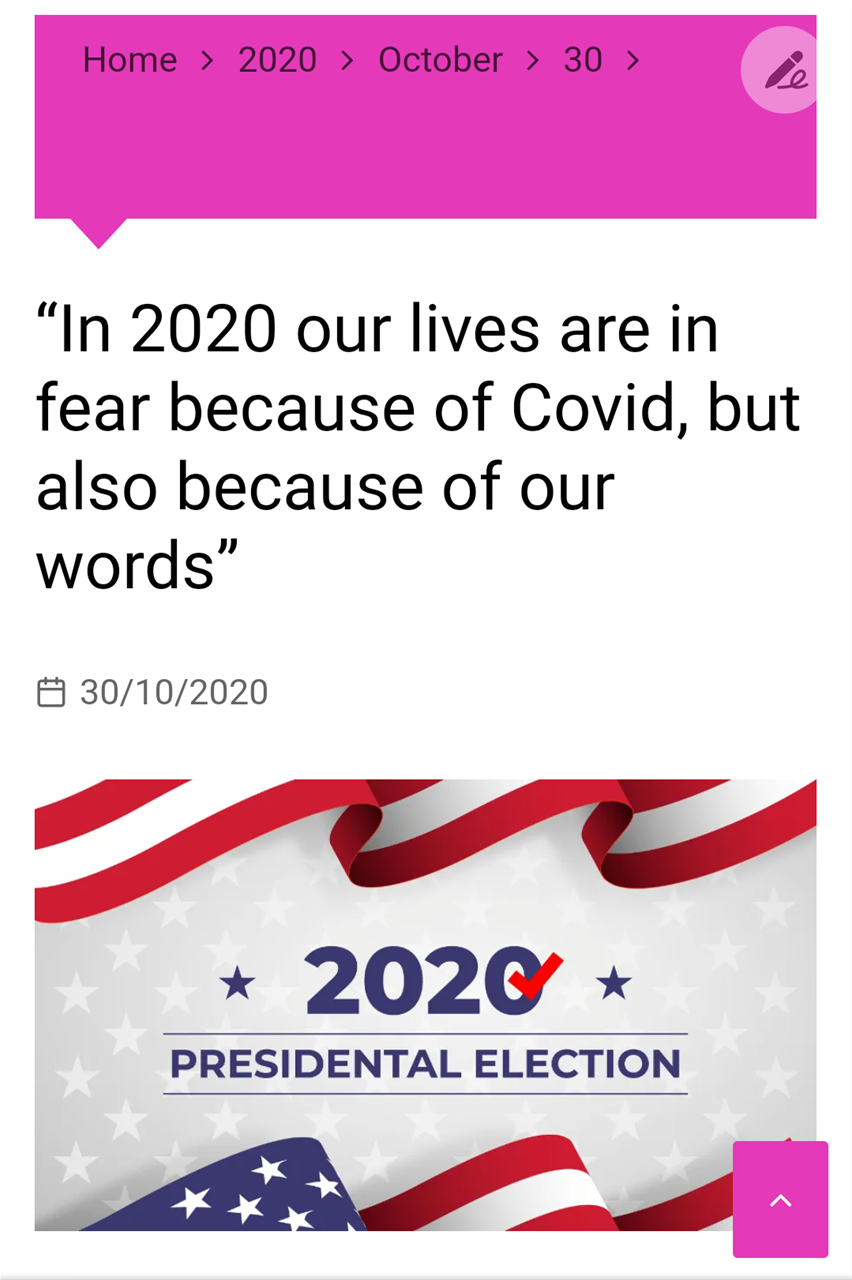