For The Epstein/Maxwell ❤ Survivor Sisters

Tara & Jenny speak while at the old Epstein mansion. 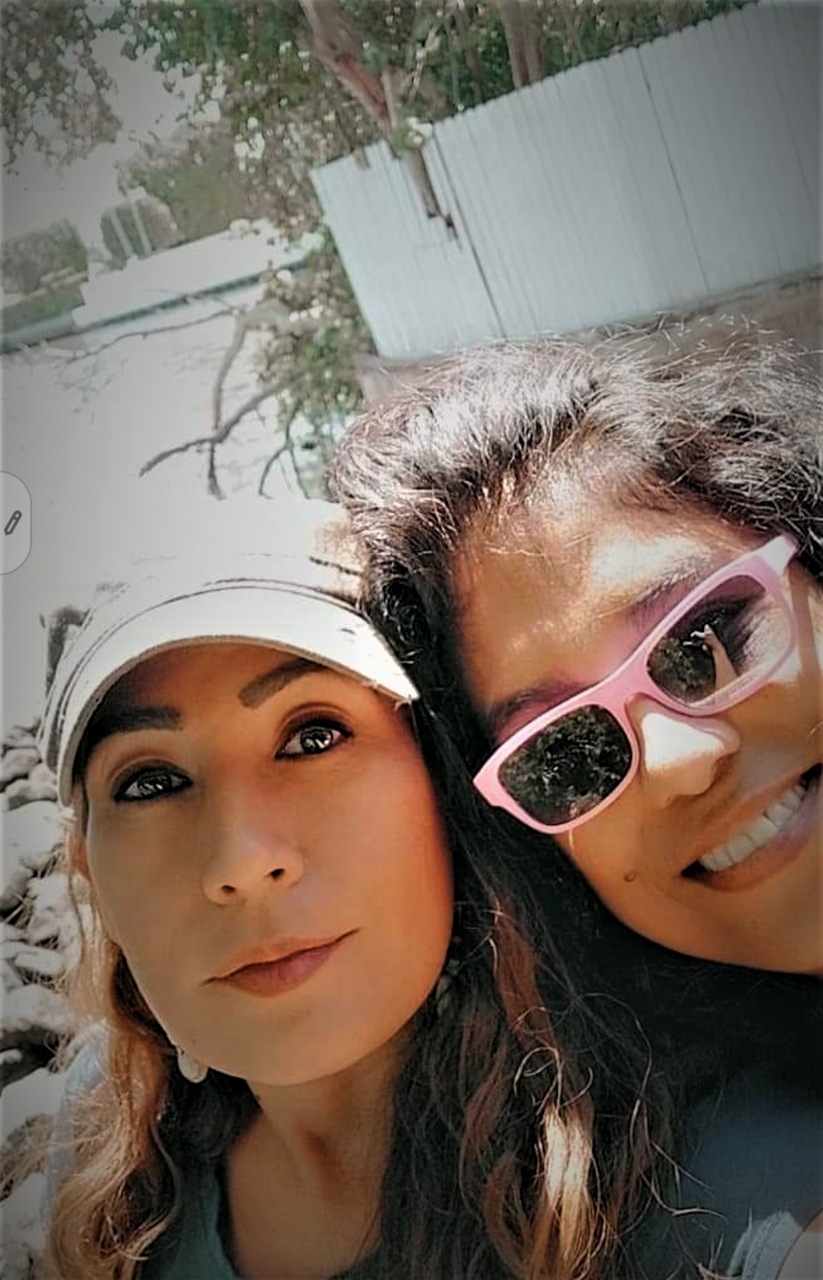 For The Survivor Sisters❤

For the little girls who could never tell

Last year, we decided to approach the new owner of the old Epstein mansion about smudging, praying & allowing the ❤ Survivor Sisters to witness the demolition-of a molester's mansion where generations of prepubescent girls' spirits were slaughtered, self esteem and lives destroyed. By a pedophile’s rapes, his clients' rapes and the droves of adults that sold their silence to a pedophile ring. A complete destruction of their childhoods by adults.

Epstein’s had a hold of many pedophiles in power through out the world because he had proof of world leaders, politicians, men with money and in so called high places that paid money to rape children.

Jenny Big Crow spoke to the owner who quickly said YES! He was extremely kind & also said yes to filming the demolition...Almost too quickly...So we proceeded with caution but for a few minutes we were fired up! Just the thought of being able to smudge such a place of evil, spiritual destruction of children’s lives while adults helped it all happen…But my feeling of Yay didn't last long because I knew we were up against a wall of silence which was not going to break because it needed to broken or we wanted it to broken.

Yet, there is somewhat of an acknowledgement and level of understanding by the new owner because he said YES to doing something healing for the victims…saying yes to our requests…even if it was not to happen. The only thing the new owner did ask-was no media. To this day, he is still the only one from the island side of the bridge to say YES. A step forward…#tinyacknowledgement

Why ask such a thing?

We are Lakota women living so close but yet so far away from it all. We lived on the other side of the bridge and our Indigenous communities have experienced that brutal deafening silence in our own epidemic-Missing Murdered Indigenous Women's Movement #MMIW. It has been so ignored legislation had to be created to properly set up a system to collect data.

During the last few years, their Haters broke the silence on Epstein by attacking them on social media…Rather than be supportive, they were met with venomous propaganda. The❤ Survivor Sisters faced and still do, very evil opinions of their OWN truth! Anything from harsh to mean to abusive: ongoing name calling, lies & judgemental scrutiny, it's endless. At times it appears as though there is a well coordinated campaign to destroy their credibility.

Who would ever imagine so many people would be mean to a child rape victim? Raped by men who paid money to rape a child..and these child rapes were in such demand that it was a worldwide business.

Yet, the fierce voices of the ❤ Survivor Sisters of Epstein/Maxwell fired back and by no choice of their own have become social media sensations by defending vehemently all sorts of truths about themselves, one another & about Epstein/Maxwell & those who should be held accountable for enabling the pediophila for sale. Confirming & hinting at secret truths may be a big part of retaliation...on and off social media, one can only presume.

In order for the ❤ Survivor Sisters to continue to move forward as best as possible-The need to constantly defend themselves must to stop. It's brutal to watch...It hurts to see this REVICTIMIZATION. It's abusive and takes a toll on their mind, body and spirit. I had to stop watching for several months.

Criminal retaliation has taken a hard toll on the brave, outspoken, very Irish Whistleblower, Maria Farmer who reported Epstein & Maxwell to the FBI in 1996. Becoming the solo target in one of Maxwell's longest revenge-hate campaigns lasting now for over two and a half decades. Maxwell used Epstein's connections to stalk & harass Farmer who was forced to hide, go by different names & move often. Yet, Maxwell would always call Farmer to let her know she knew where she was.

This long term harassment, stalking & obsession by Maxwell - has caused great damage to Farmer who as of recently suffers from two cancers, infections, heart problems, endless surgeries and many complications. Her suffering goes on and on. It is painful to witness. It's Maxwell & Epstein faults...

So, we as the Intertribal Warrior Society for Children issued the following statement to the Epstein Maxwell Survivor sisters and delightfully received the wonderful message of gratitude and thanks from Virginia Giuffre, the outspoken firecracker who has fought for her truth & others tirelessly. See our & Virginia's messsage below 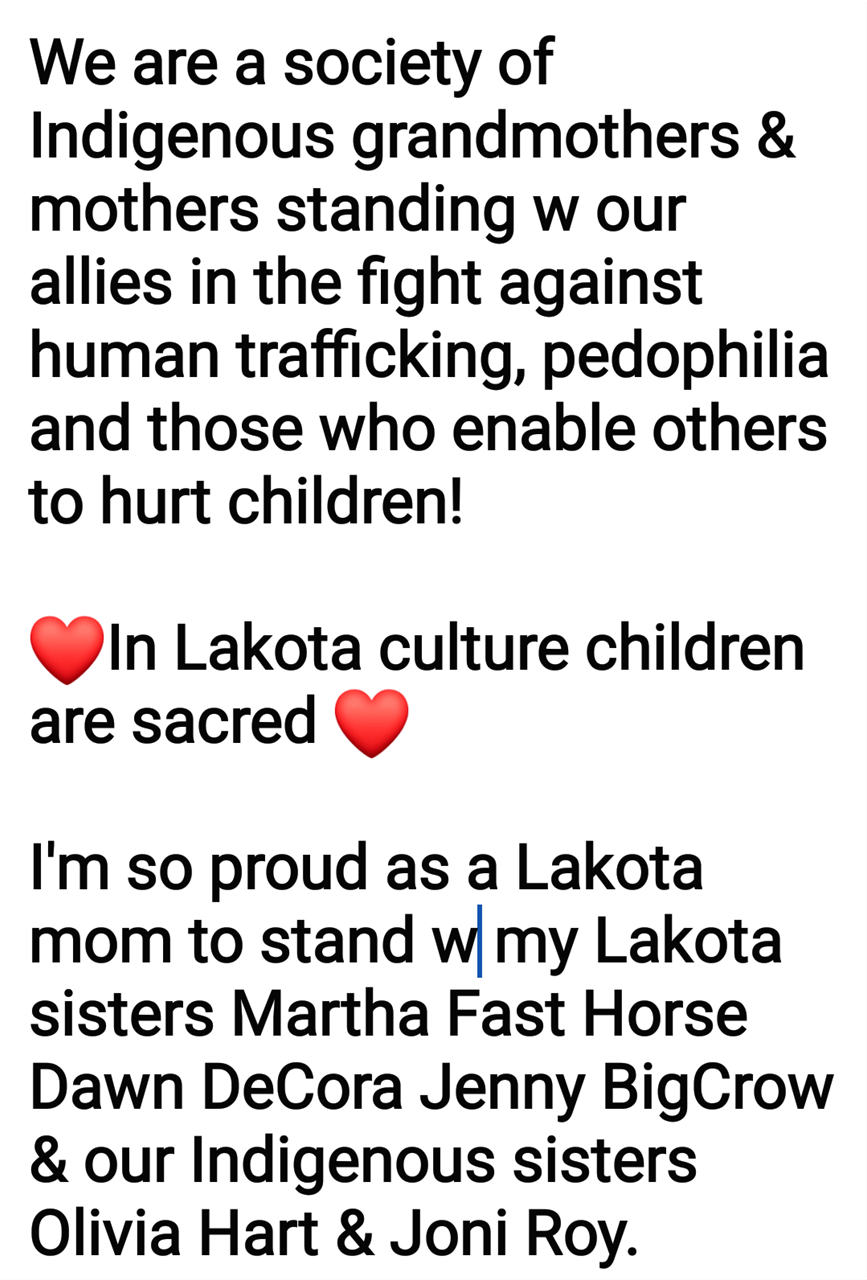 Our message to the Survivors & Virgina's Giuffre response 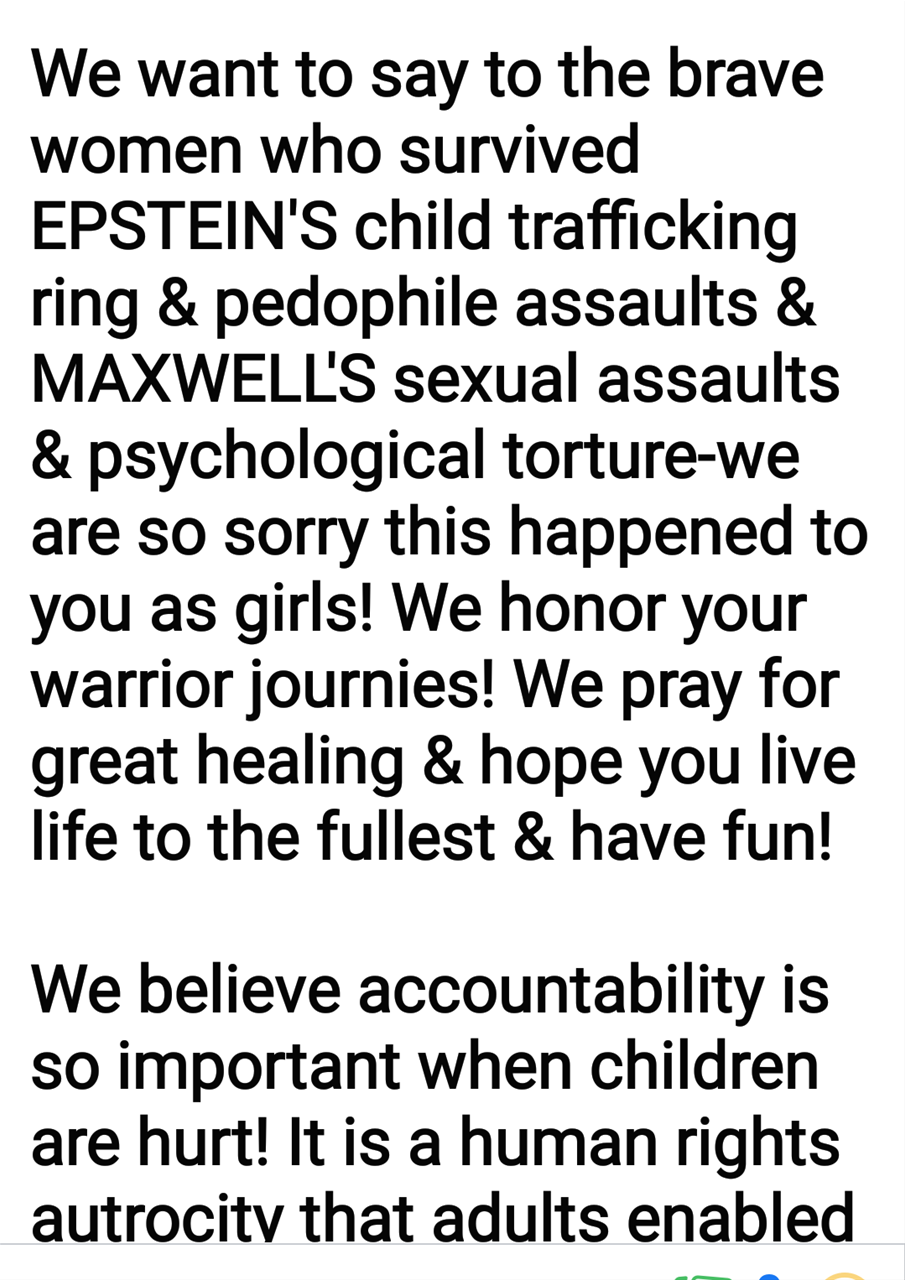 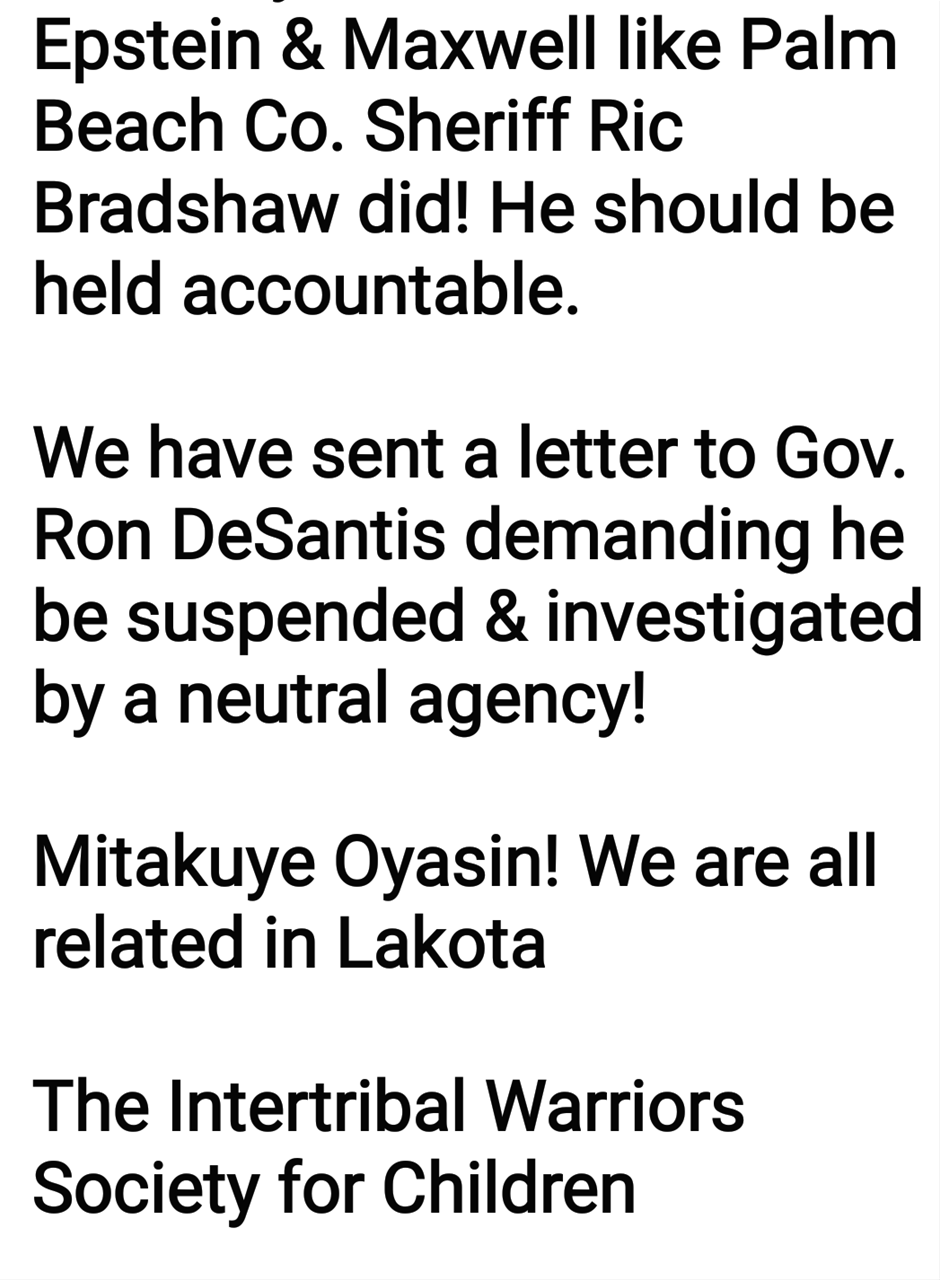 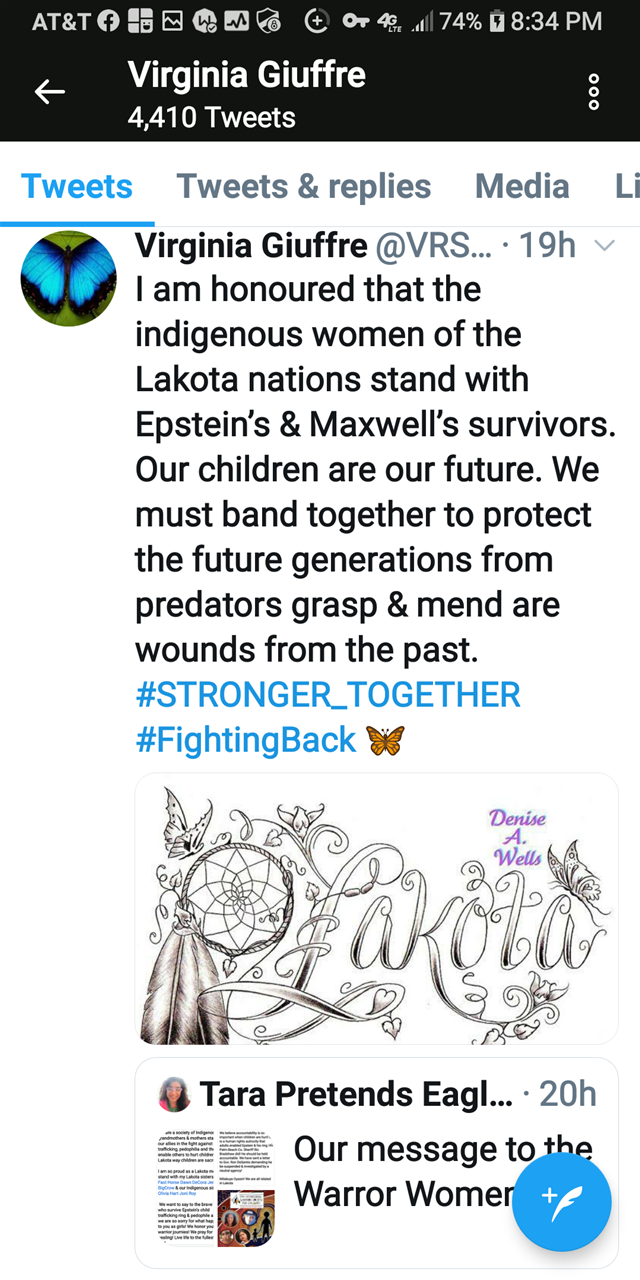 It never goes as planned

I spent four months emailing back and forth with the owner who always responded immediately, stating he was waiting for permits to go through. I felt a sense of wicked apprehension every time I contacted him. I knew I couldn't ignore this feeling and would eventually have to act on it.

In the meanwhile we had reached out to some of the survivors to participate and they were told the owner wanted no media. Then one day I got an email from Julie Brown from the Miami Herald, the one who exposed the Epstein sweetheart deal. She was asking me about the healing ceremony at the molestation mansion AND had I spoke to the owner…

We never mentioned Julie's contact to the owner for all he knew. we did it. But when I reached out again, he said he had the permits and we could get in the house that upcoming weekend to do what we needed to do. At one point he said he'd even get Jenny the keys and he didn't need to be there.

Even with his words in an email I had to answer my own doubt… My emails to arrange the weekend went unanswered so I decided I was going to go the molesters' mansion that day because I knew in my heart it would not happen with the owner. So I met Jenny and we drove down a narrow lane led by GPS to the mansion on the left at the end.

The aging home which was about forty feet from the ocean and directly to the left was the backyard and creepy wall that prevented the mansion from having an ocean view. Everything seemed much smaller in person.

I had lit up sage before we even got there. On the way I had to pass Mar A Lago and smudged as I got stuck in traffic. It is so interesting to have learned Mar A Lago was only a mile from the old mansion. As we stood in front of the gate that was locked where suddenly out of nowhere a van appeared and a friendly man jumped out…He asked politely what we were doing there and when we told him we were there to just cleanse it up and say some prayers down by the water, he nodded his head in agreement as we explained. He responded by saying that something definately needed to happen with that place. I told him we just texted the owner and he knew we were there.

Then two days later, Jenny called me and said the demolition had already begun and it was all over the news. He finally got back to me and said that it was now a construction site and now one was allowed on the property throughout the weekend… So we did not get inside…we did not need to…We did what we needed to do from our spot by the water and back. It was so powerful. The sage smoke that would not stay lit at my own home because I thought it had gotten too dry-was continuously flowing directly toward the mansion of molestation... No matter where I moved even with the wind, the smoke flowed as if directed to the house.

It was truly amazing. That's when I knew ŵe were exactly where we were supposed to be... We both spent about a half an hour by ourselves: Jenny sitting up against the ugly wall and I stayed away on the grass. It was hard to relax, my heart pounded but I kept reminding myself of the direction the smoke kept blowing.

We invited ourselves to the mansion of molestation a few days early because we knew we would never be allowed inside. Perhaps the Creator was protecting us and it wasn't necessary. We still honored their brave journeys that day. We smudged, cleansed and prayed for the ❤ Survivor Sisters healing….and for their peace of mind in a world that still silences sexually abused girls.…. 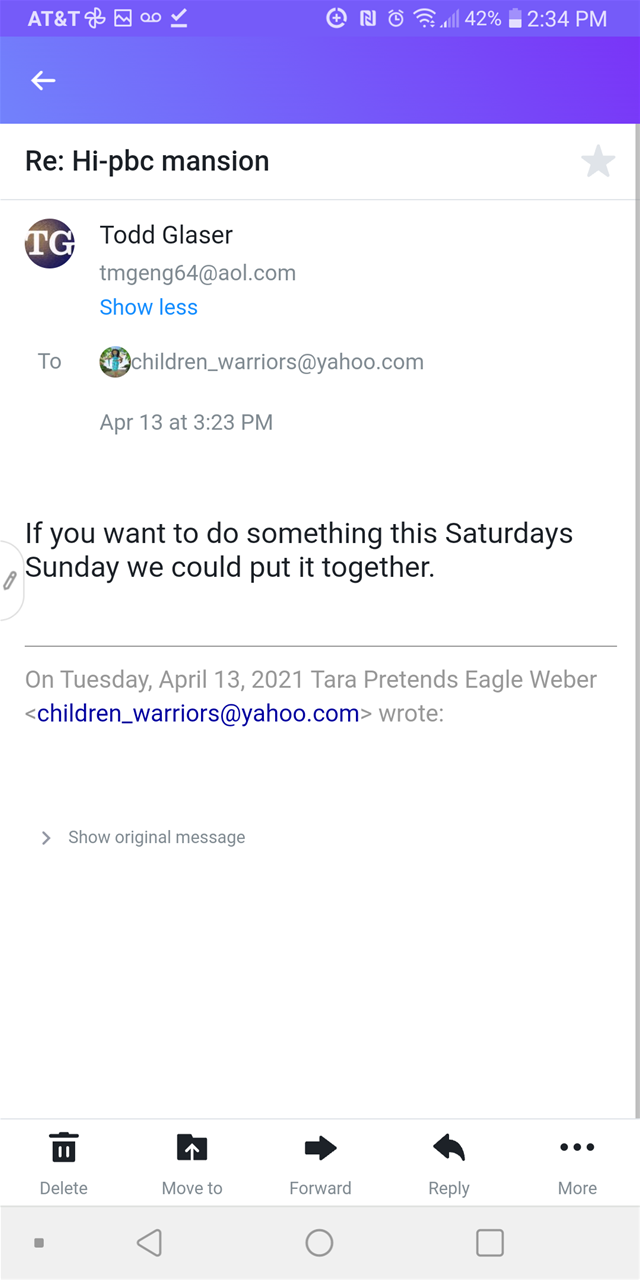 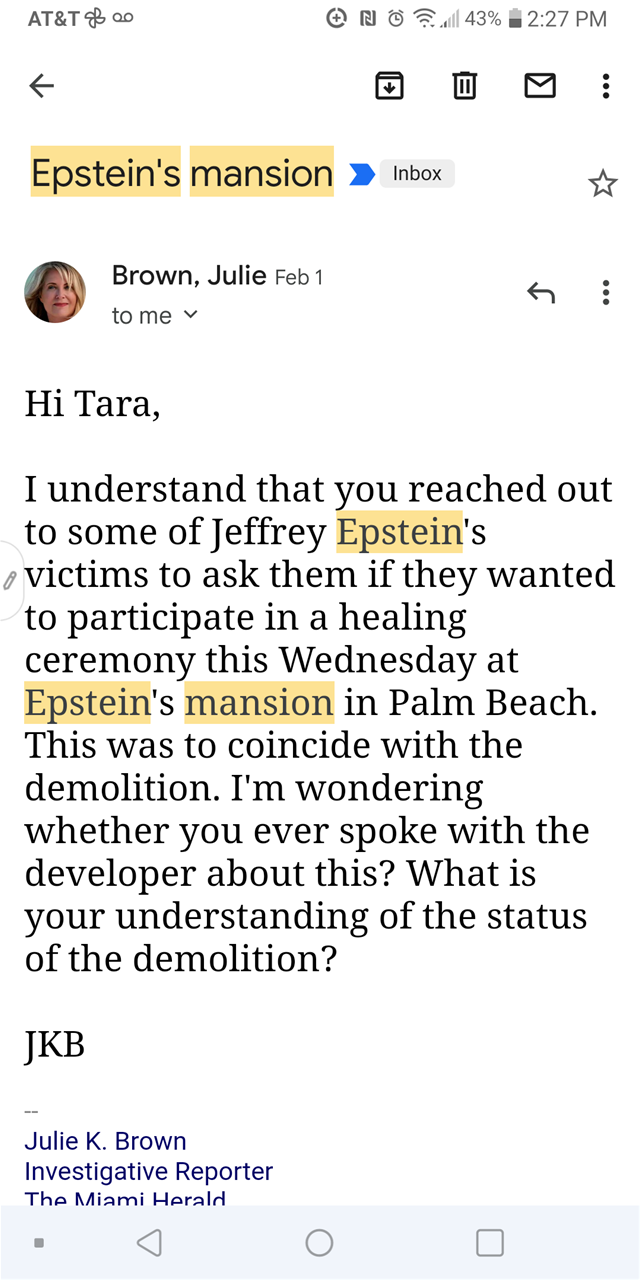 bad vibes, so we go on ahead 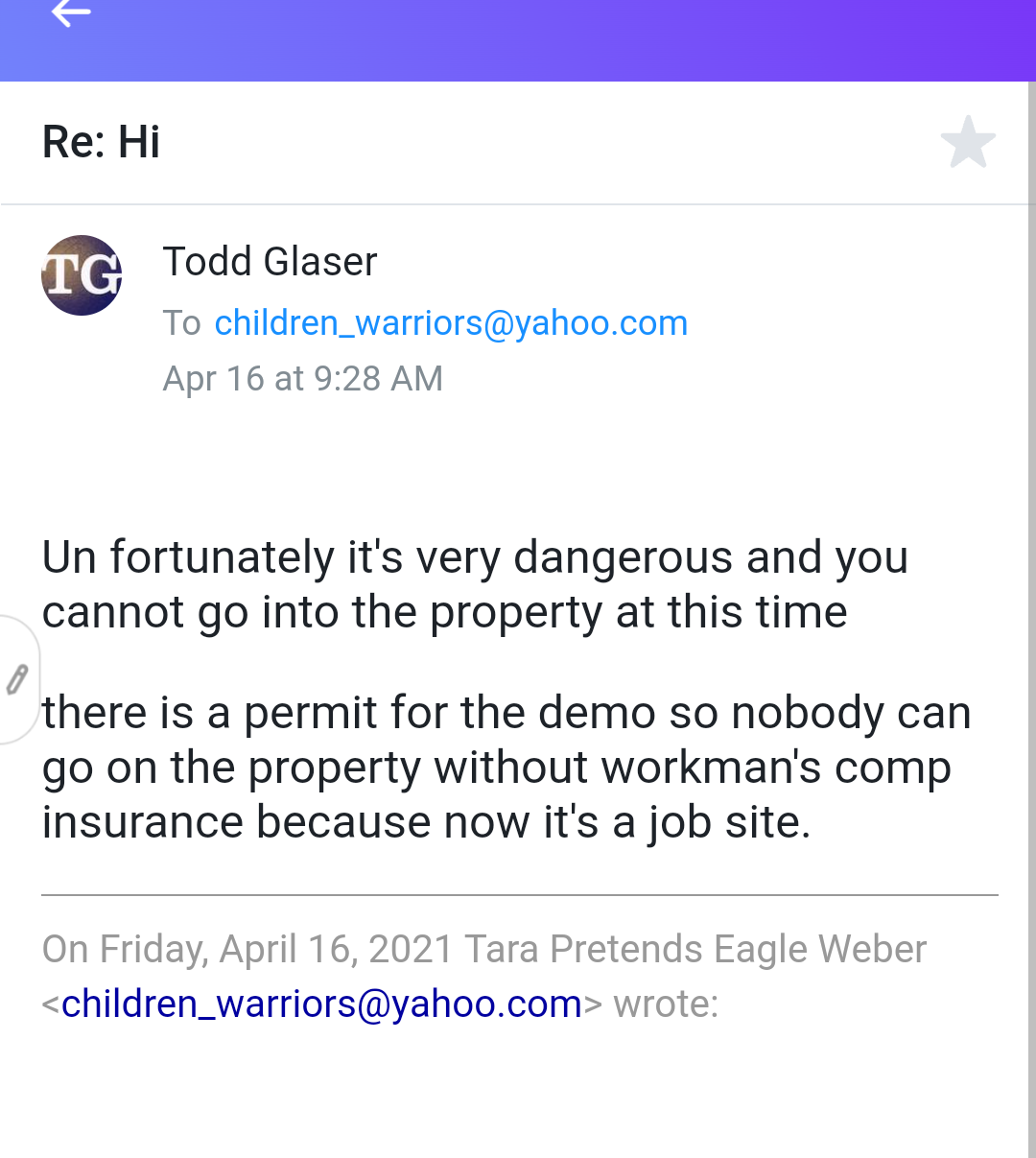 Now it is dangerous. 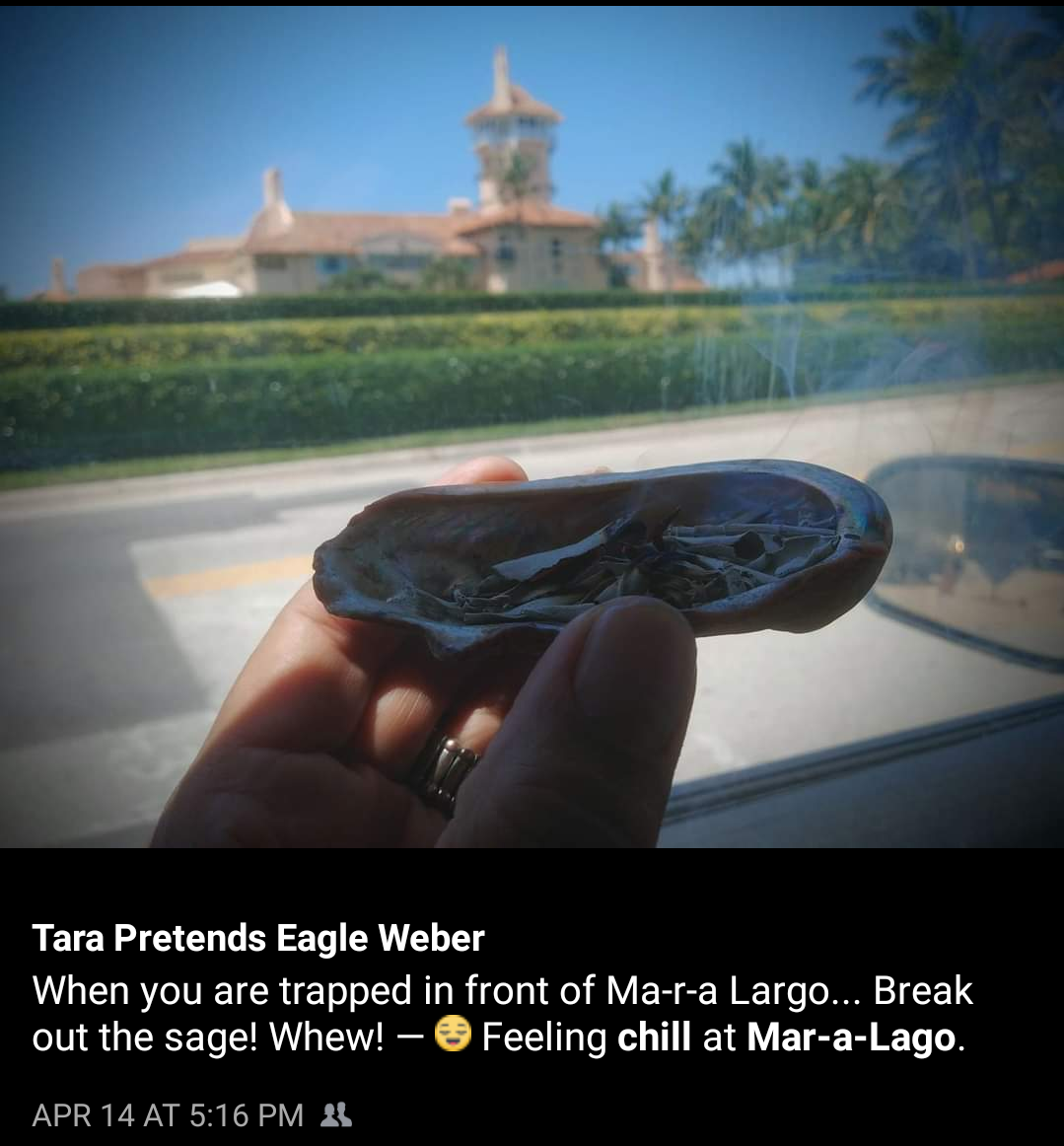 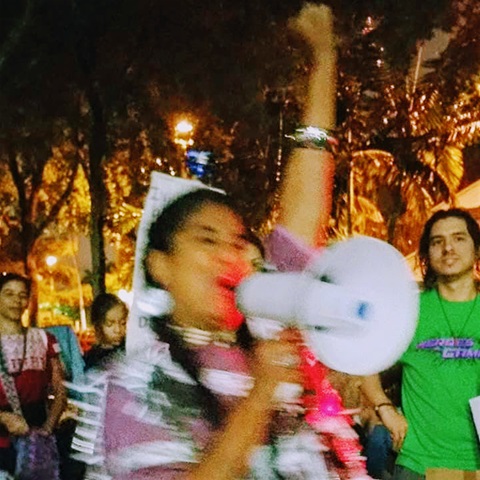 The Accounability Project for PBC Girls-2020 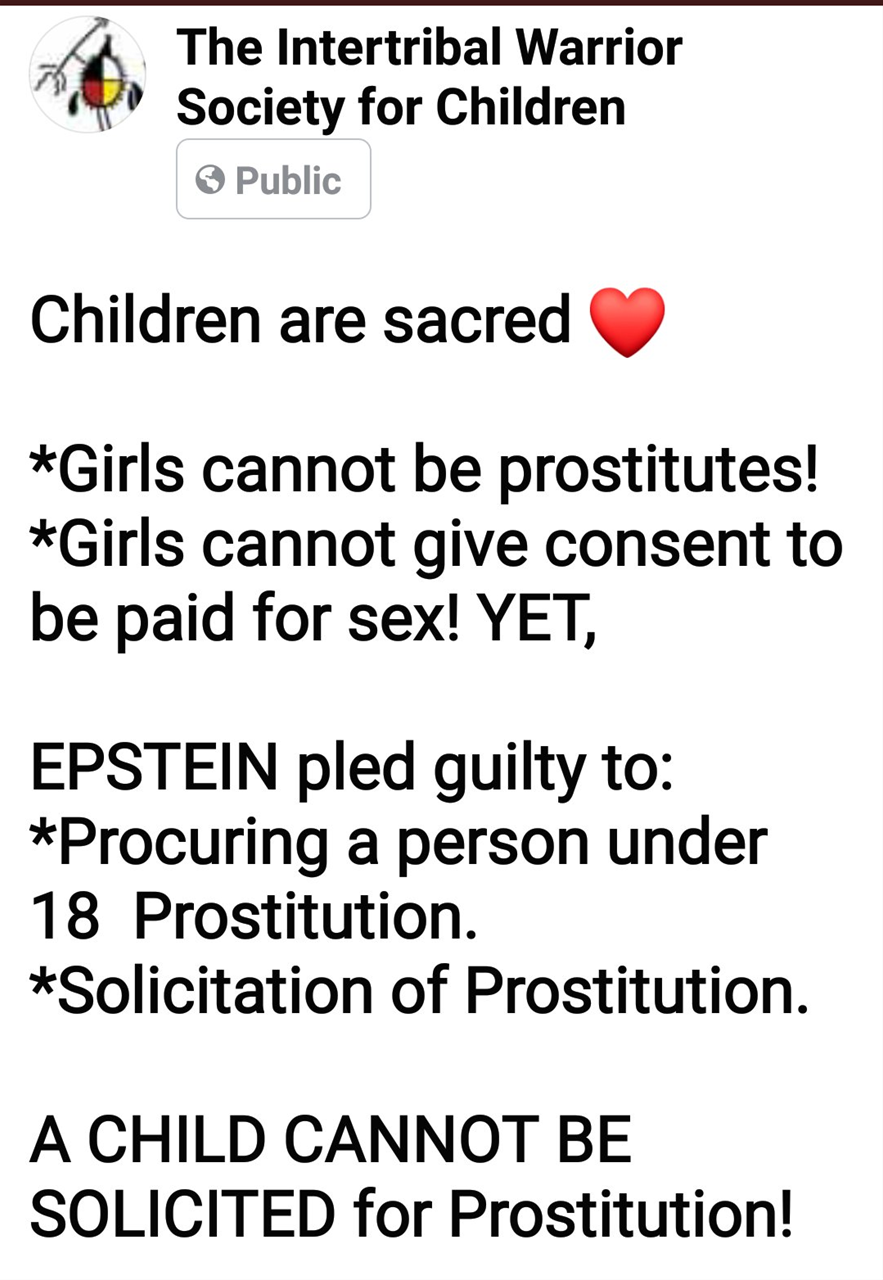 Another message for the Warrior Women ❤ 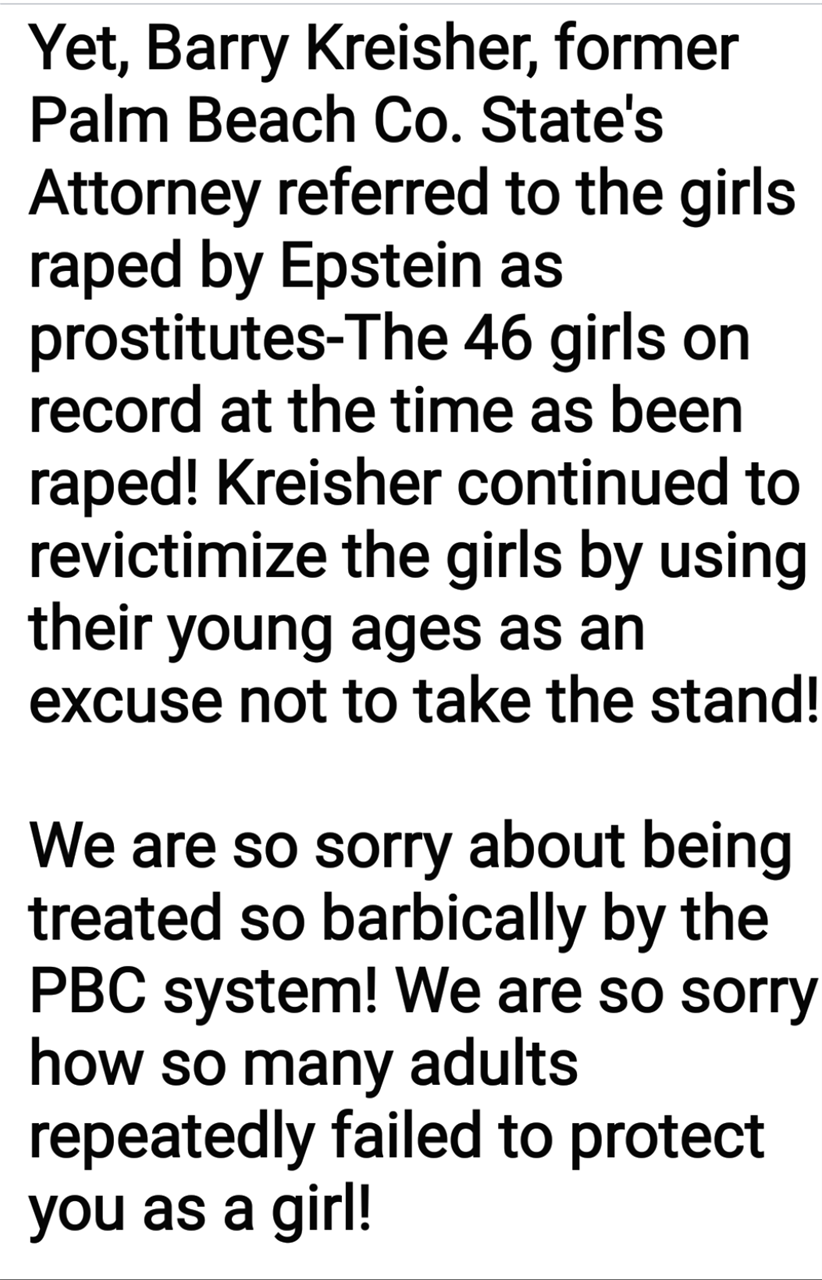 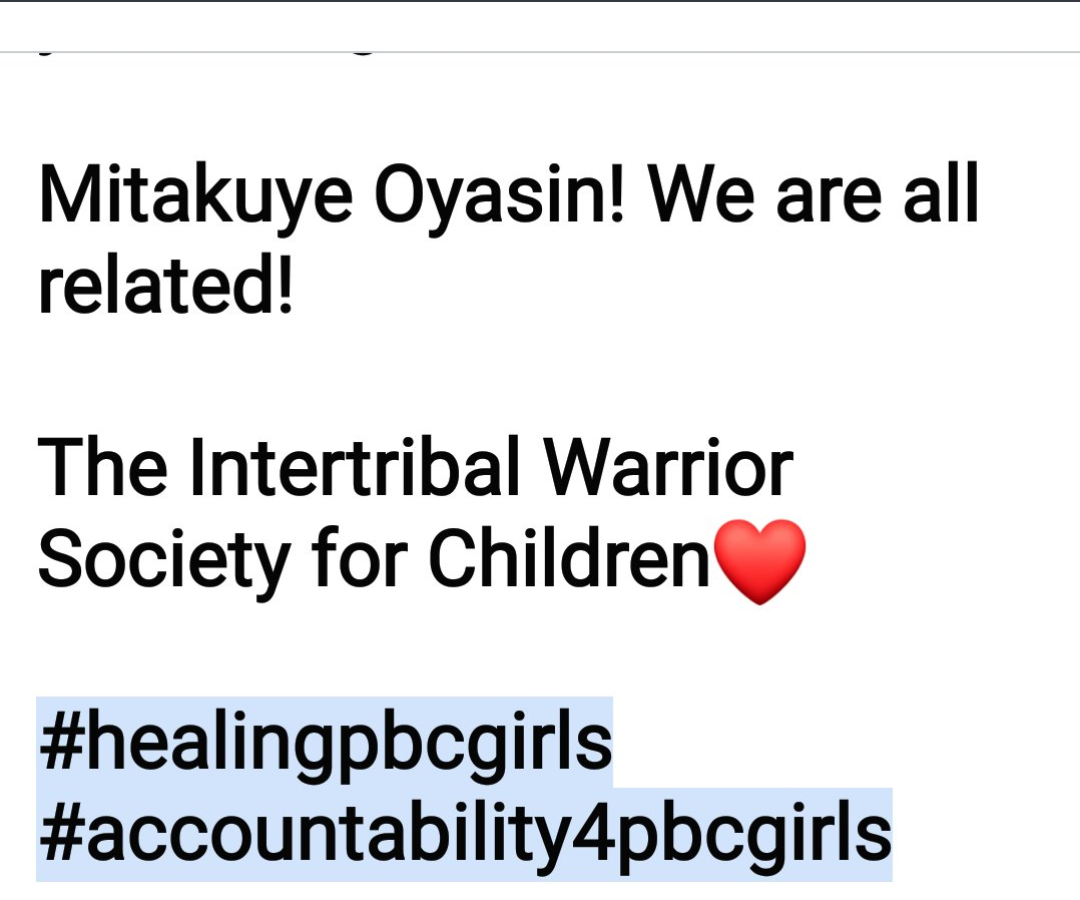 We are a society of Indigenous grandmothers & mothers, standing with our allies in the fight against human trafficking, pedophilia and those who enable others to hurt children.

SEE OUR PRESS RELEASE & LETTER TO GOV DESANTIS BELOW! 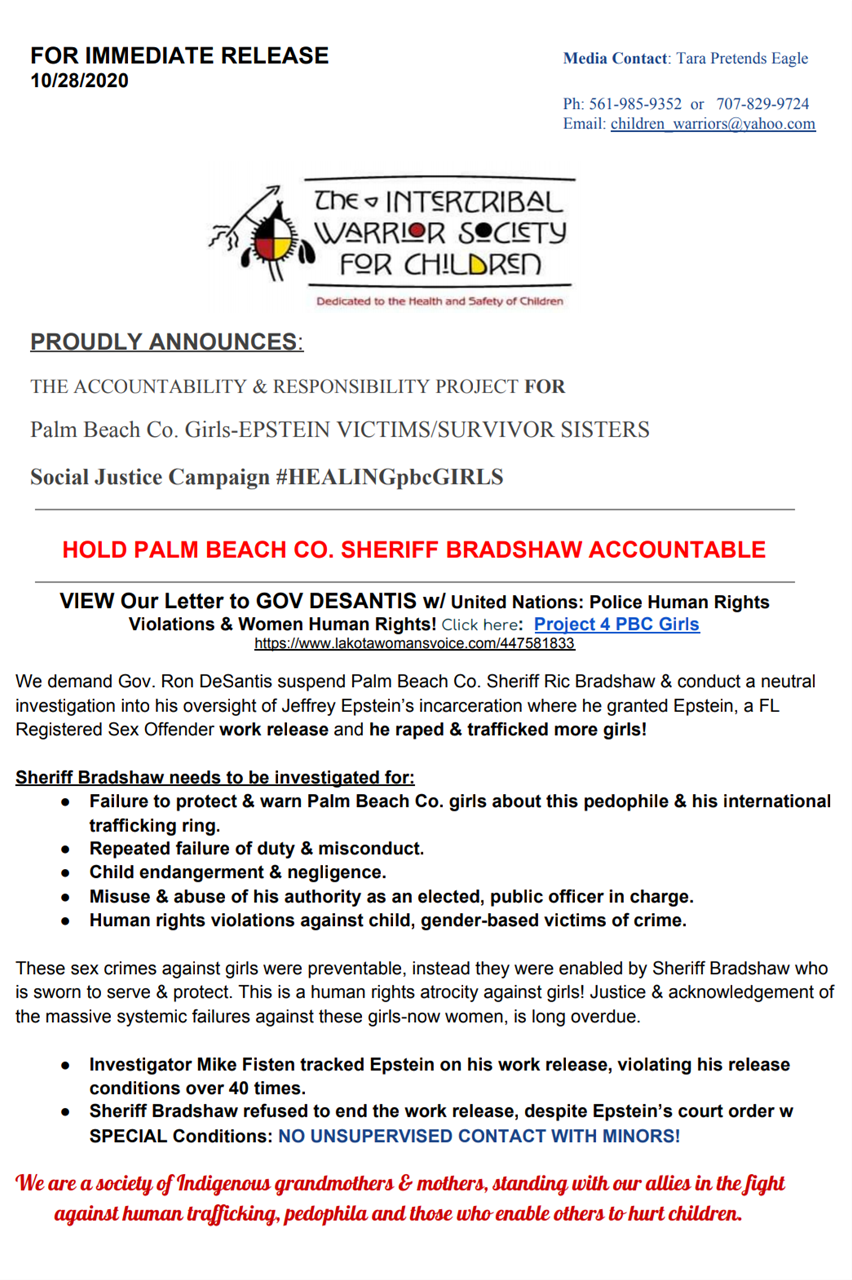 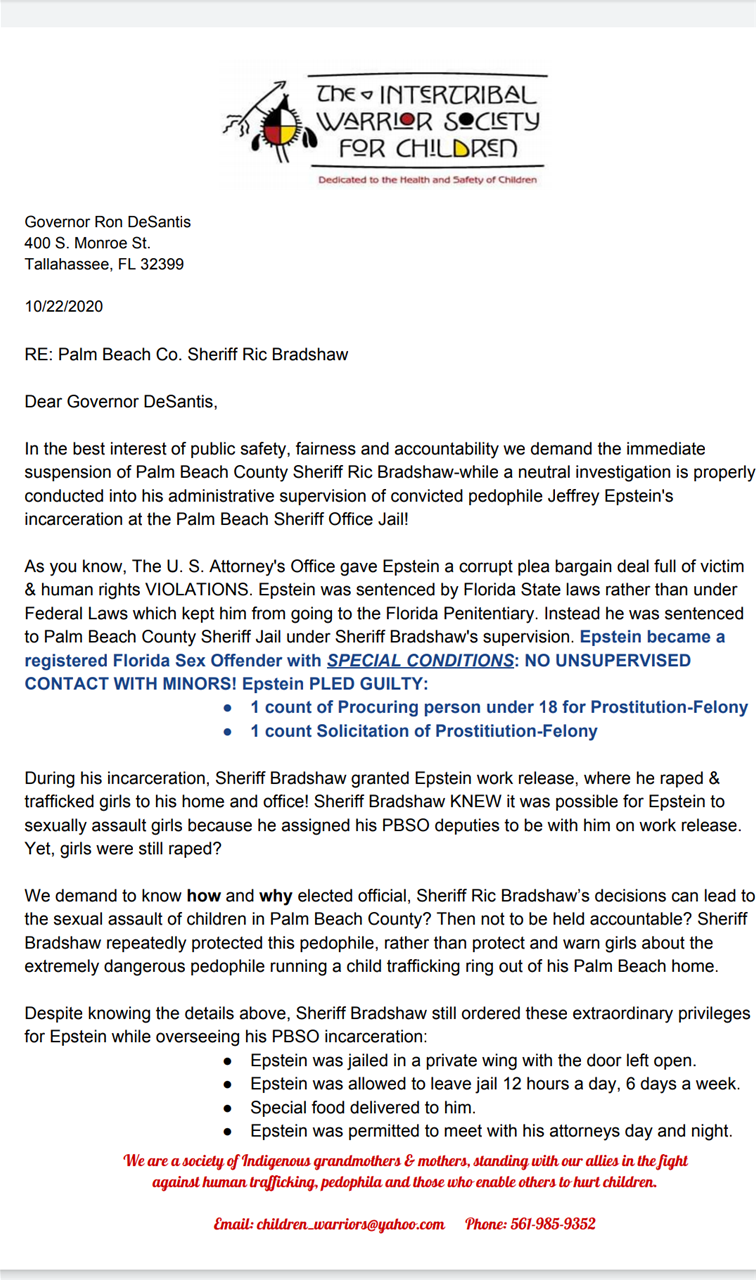 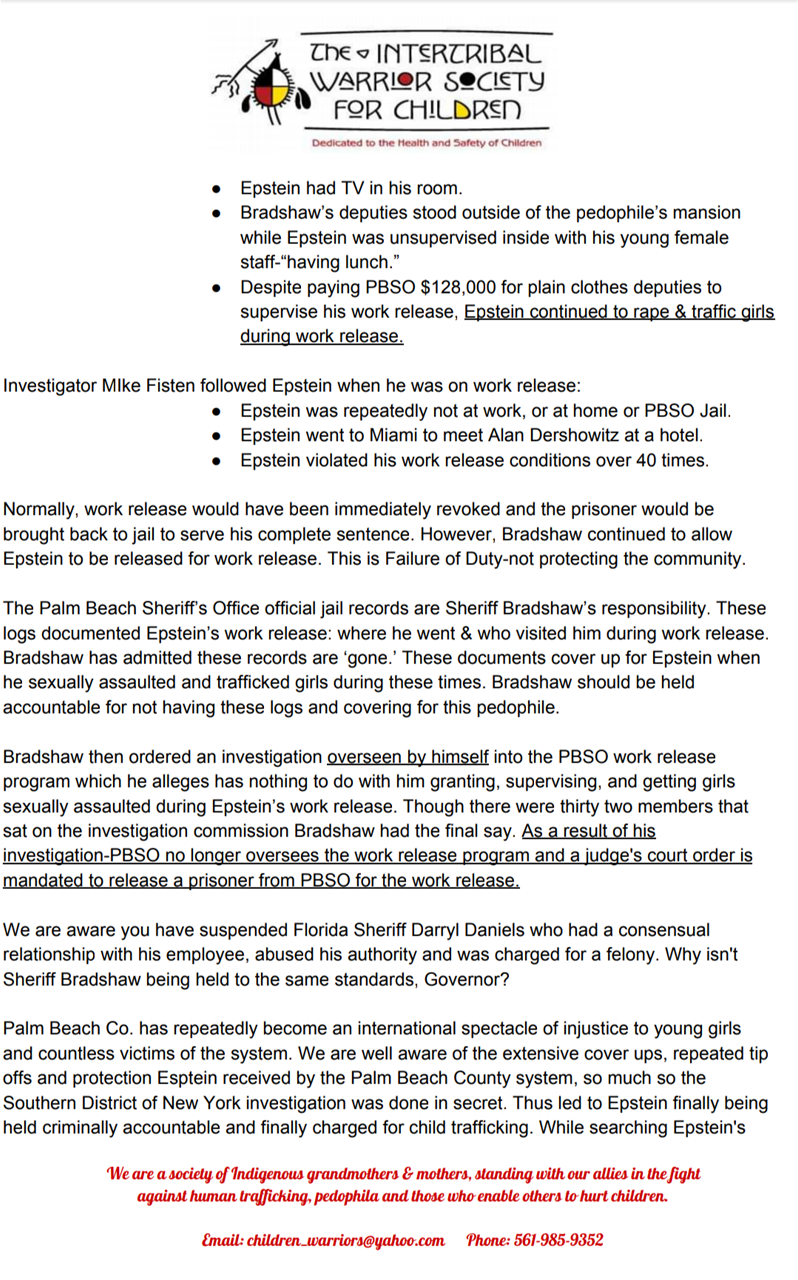 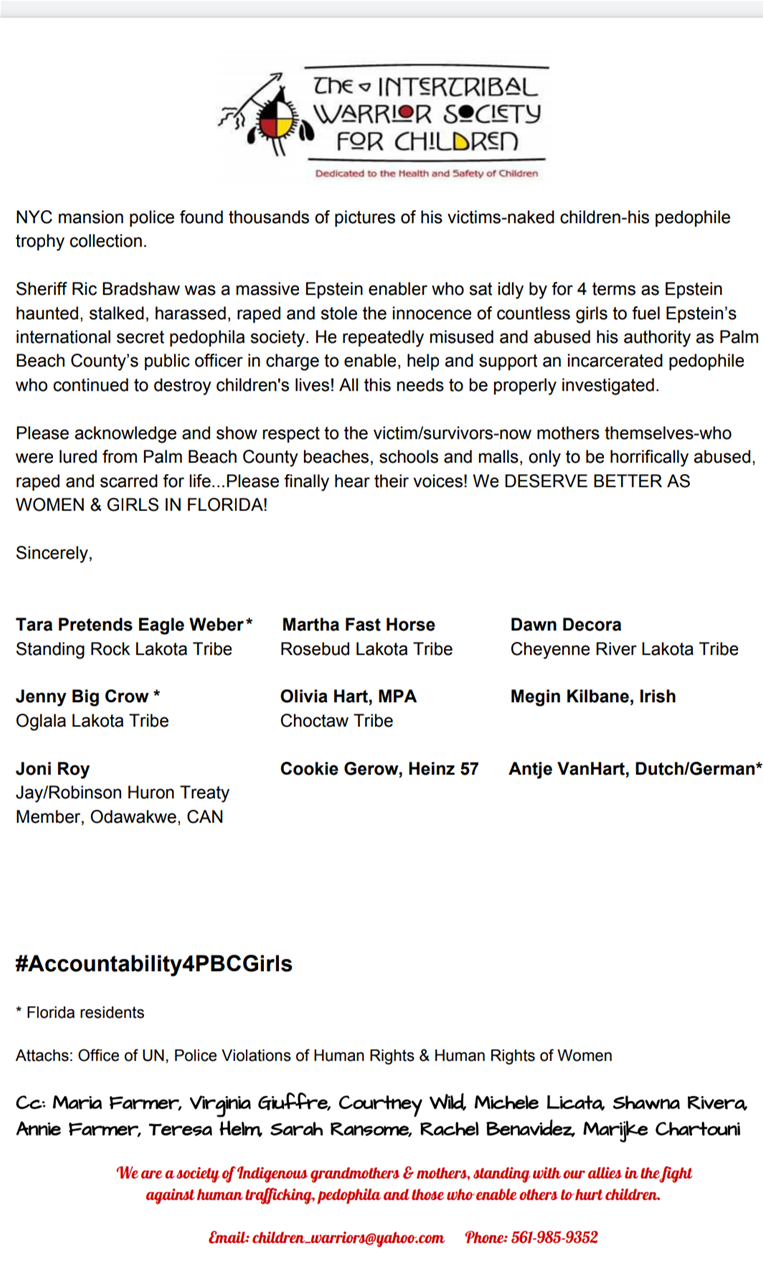 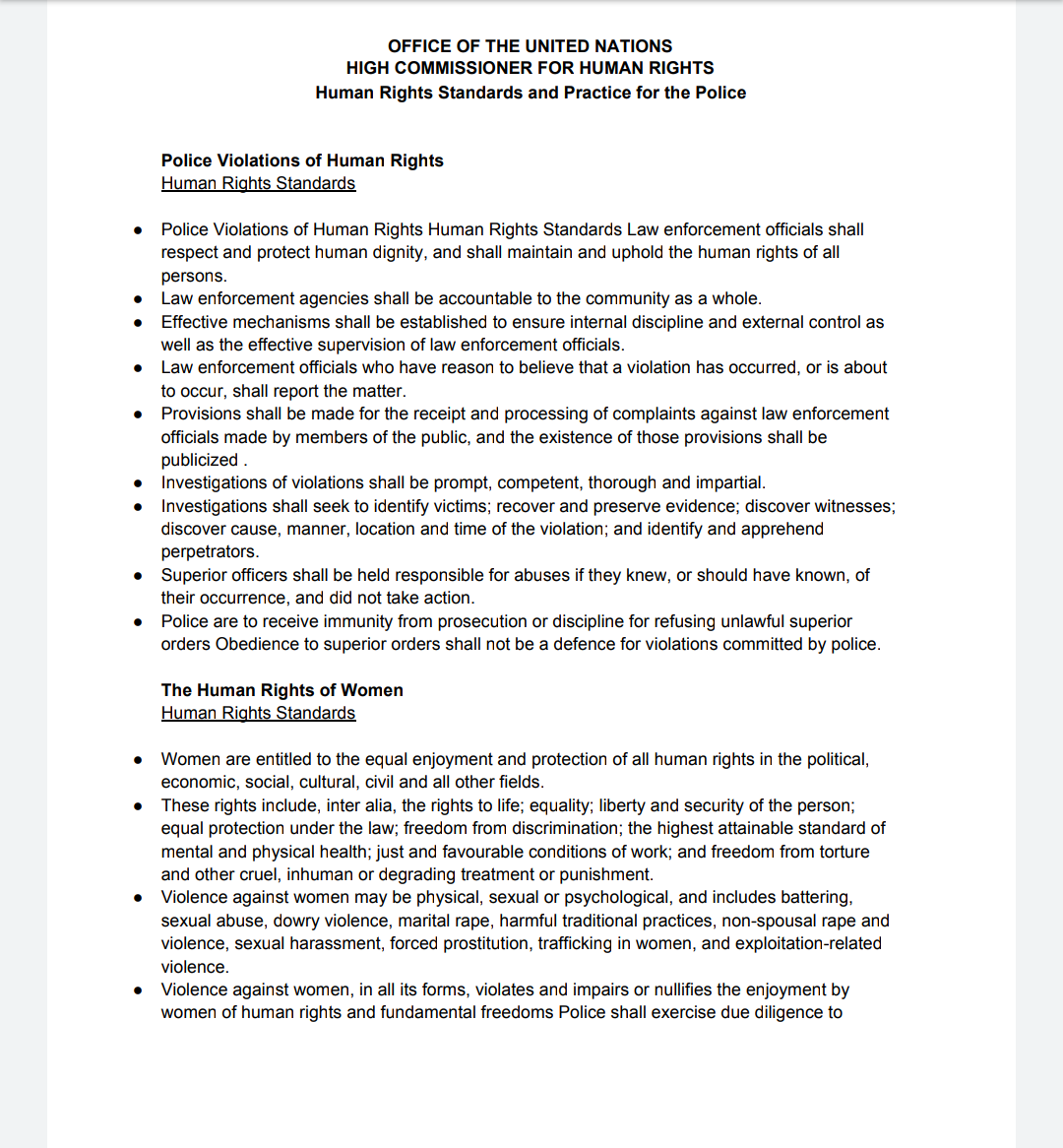 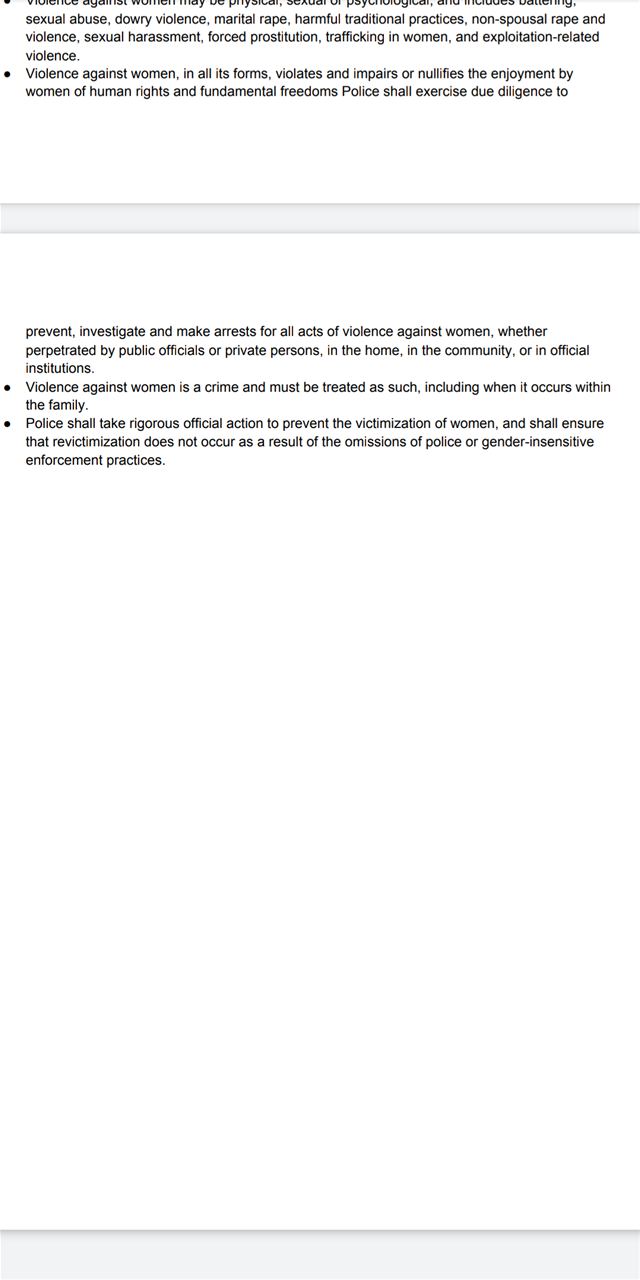 Cut & paste 1 of the messages below OR Create your own!

Then send it to Gov. DeSantis!

We honor the girls, now women who were sexually assaulted & trafficked by Jeffey Epstein through his international pedophila society which he ran out of his Palm Beach mansion! Girls of PBC were forced to sexually serve adult men who were high level politicians, royalty and men with money

We demand from Gov. Ron DeSantis the long overdue acknowledgement, justice and a proper neutral investigation of Sheriff Rick Bradshaw for his repeated failure of duty, negligence, misuse & abuse of his authority as a public officer in charge.

The cover up efforts and allowances by Epstein's enabler Palm Beach Co. Sheriff Ric Bradshaw reached epidemic proportions when he granted Epstein, a convicted pedophile and Florida registered sex offender work release during his incarceration which resulted in Epstein raping and trafficking additional children while being supervised by Bradshaw’s deputies!