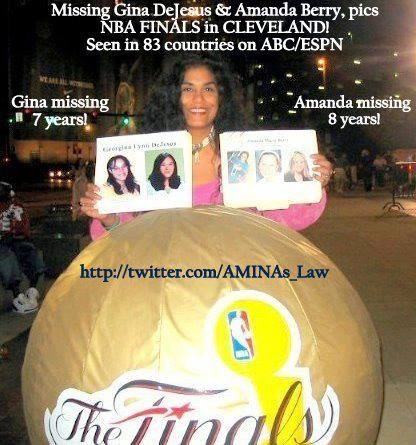 The night the NBA helped me change the world for 2 missing Indigenous teens,

Who would be found alive 6 years later!

12 years ago today, 2 missing Indigenous teens, Amanda Berry, Cherokee & Gina DeJesus, Puerto Rican from Cleveland pictures appeared during the 2007 NBA Finals! That was broadcasted in 83 countries by ABC/ESPN! Amanda, Gina & Michelle Knight would be found alive after being held in captivity for a decade, 9 & 11 years!

I was determined to show the world that these children who were not white with blue eyes were missing!

After the Cleveland Cavaliers won the 2007 Eastern Conference Division, the idea came to me to approach the Cavs to broadcast the missing girls faces. Not only had they become Cleveland’s darlings, but they both were abducted several miles from where the game was being played. That was the angle I used in my letter to the Cavs. I got a call from the Cavs and they had to ask to NBA’s commissioner, David Stern. His response was that he wanted to see a need. So I went to work.

I was encouraged by the recent publications of my articles on Native American entertainers, some released over the AP Wire, that I could really make something happen! During this time, my son and I were  extremely sick with Lyme disease! My son was born with it. Yes, it can pass to through the womb! We did not have the health care we needed...but I knew I could make a difference...It was time for change! I HAD to make this happen for the two missing children who in 2007, would have never gotten international publicity for their cases.

It was still the MySpace days, so I reached out to my fellow Indigenous people on there & Rezfox, a Indigenous website and asked them to fill out the form on the NBA website, asking them to post Amanda & Gina’s pictures during the NBA Finals! To my shock, I received a call just a few days later from the NBA. I was told that David Stern said YES to broadcasting their pictures BECAUSE THEY HAD RECEVIED SEVERAL THOUSANDS EMAILS FROM PEOPLE DEMANDING TO SEE THE MISSING GIRLS ON THE NBA PLAYOFFS.

NEVER SEEN IN THE NFL, NHL OR MBL!

That evening, I picked up Gina DeJesus mother and brought her to the arena where she was interviewed about her daughter’s picture appearing on an international, professional, sports championship broadcast. All because very sick mom with an even sicker child, would not let it go...

"Tara Pretends Eagle Weber-Thank your for helping my parents raise awareness of my disappearance, and for your efforts to promote the legislation that could become AMINA's Law" - GINA DEJESUS

Because of you, this played out the way it did! This night help ignite 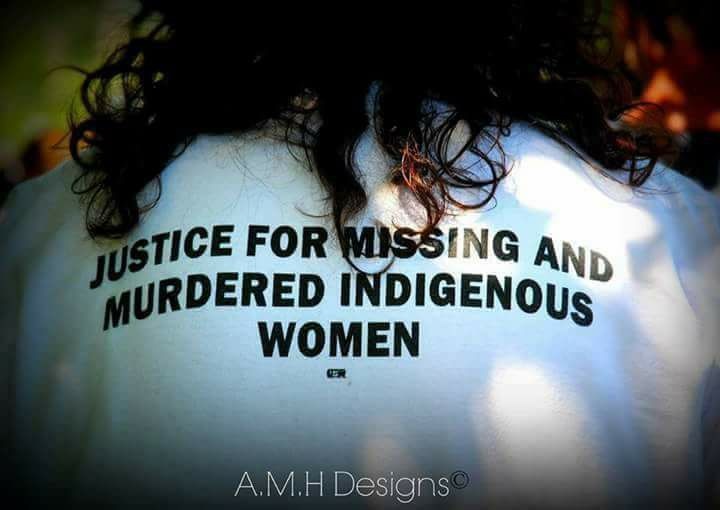 I started this blog out by sharing my passion work with families of the missing because it was one of the most unheard voices...ever...I had 16 years as a professional victim advocate with the justice system and society. I had seen a lot...But NOTHING prepared me for what I saw, felt or experienced advocating for missing Indigenous children. It was devastating. It was traumatizing. It was a silent horror show...

With all that I saw, I could not walk away from these families, no matter what. I must say I have felt the backlash for backing these families...I have felt the consequences: directly toward my wellbeing, my privacy invaded for years and even with some family members turning on me. Yet, I did not give up. I was there because there were two missing girls that no one seemed to care about when they were missing.

After experiencing ceremonies and speaking with my Lakota elders when I lived in South Dakota, I learned never to doubt my special intuition. So when I normally would have doubted myself, I did not when it came to Amanda & Gina. I knew they were alive and I knew they were together in my heart and my spirit...my work screamed that. There was no need to ever share that with the families either…I never gave up no matter what. I was not going to wait to have a missing family member to take action!

Together WE collaborated for MMIW!

Another one who NEVER gave up is my sister, friend, Bridget Tolley who is Algonquin from Kitigan Zibi Anishinabeg in Quebec, Canada. Her mother, Gladys Tolley was struck and killed by police cruiser in October 2001. She is the Founder of Families of Sisters in Spirit, a strong voice for MMIW in Canada. She is also active in cause related to police violence. She is a founding member of the Justice for Victims of Police Killings Coalition in Montreal, Quebec.

After fighting for 17 years for justice in her mother’s case, Bridget finally got her day to testify at Canada’s Inquiry on MMIW on 9/26/2018. When her mother was killed she was unable to get the police report, she needed a attorney to get the report. The report indicated corruption and secrets, as the police officer who was driving the cruiser, his brother investigated the death and closed the case without telling the family. It turns out, there were 5 family members related to the cop involved in the cover up! These type of secrets are common in cases of MMIW everywhere.

Here is an article from rabble. ca that provides more details:   http://rabble.ca/news/2011/03/bridget-tolleys-search-justice-her-mother 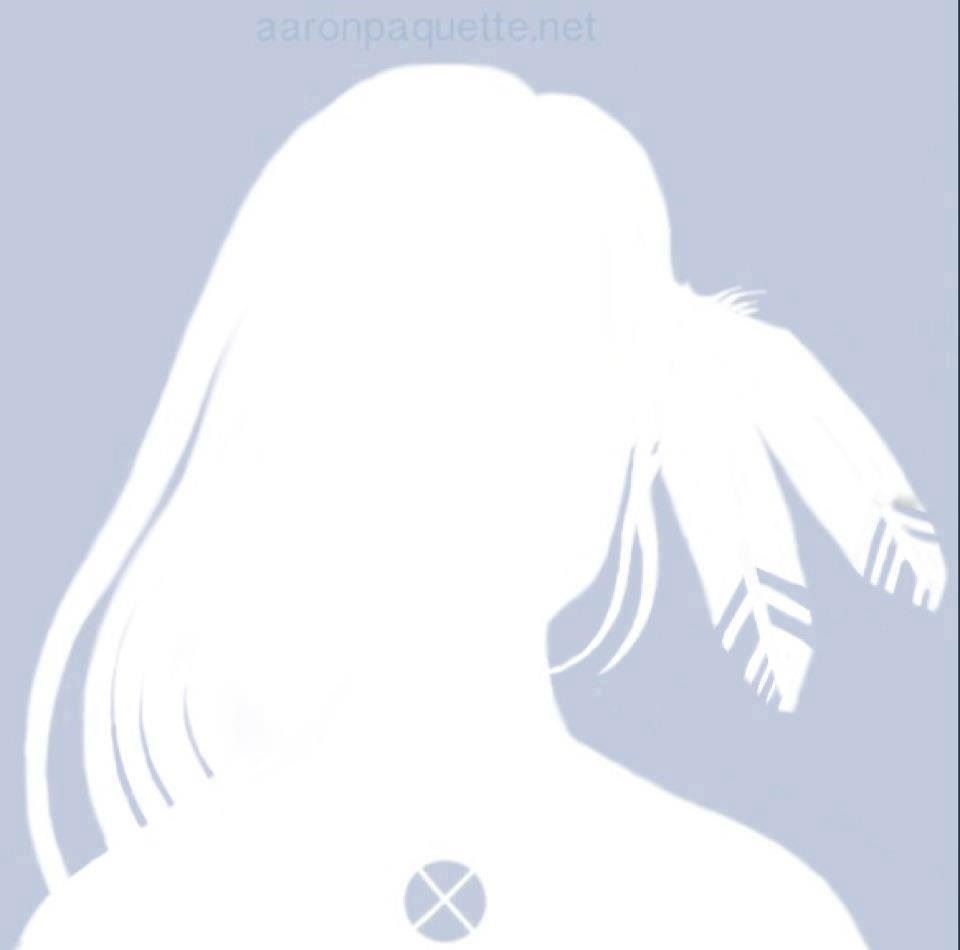 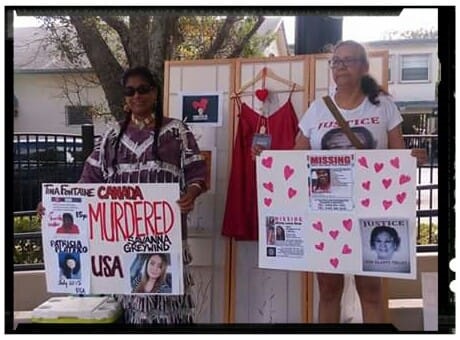 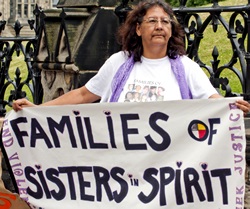 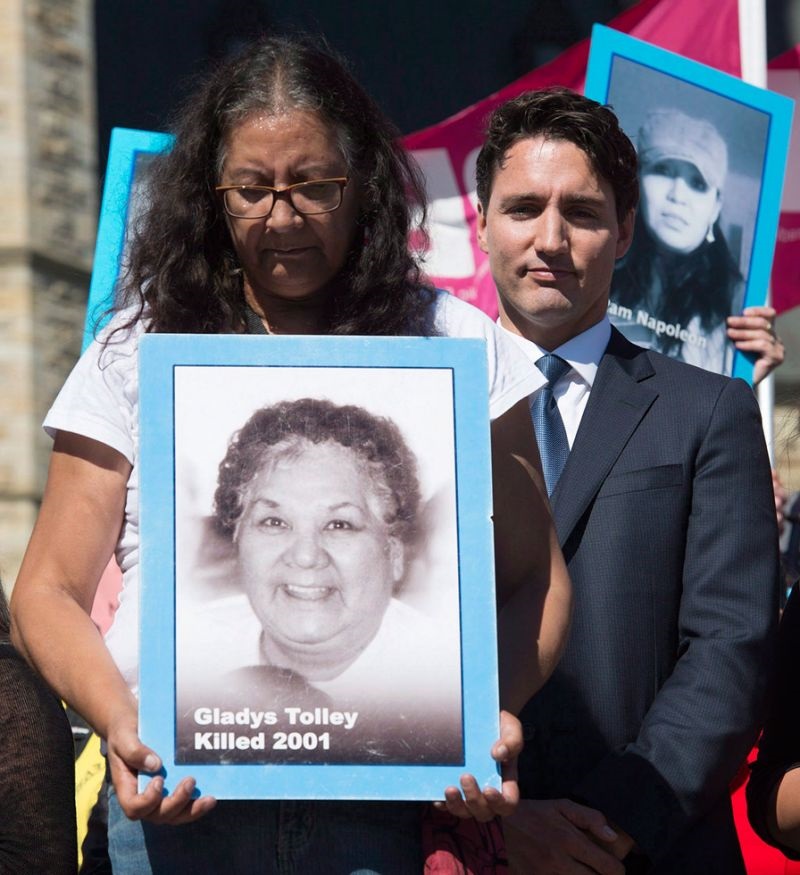 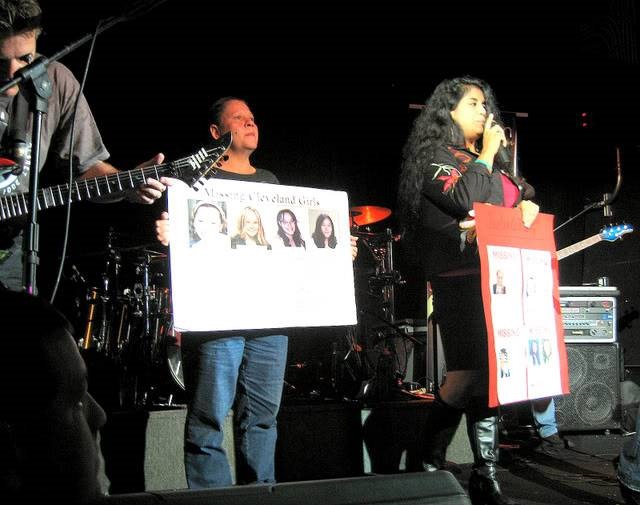 For the last 15 years, I have spent much of it advocating and bringing to the public eye-the epidemic of Missing & Murdered Indigenous Women! #MMIW I first became aware of the epidemic in Canada when I was living in the Black Hills of South Dakota. I did not learn of this horrifying problem as a VAWA Administrator which infuriated me. How could I not know of this while working in Ohio just a lake from Canada. I remained enraged for years. I felt so helpless...

When I drove home to Ohio I made a promise to myself that I would make a difference with MMIW...I had no idea how but that did not matter...It was in my heart to do something...I became aware of the missing Cleveland teens, Amanda Berry who is part Cherokee & Gina DeJesus who is Puerto Rican-Indigenous young women...

I eventually became friends with both of their mothers. I visited them, encouraged them and taught them about victims rights! I never told them what to do as it was not my place. Because of what I saw and experienced, I had to get creative how to get attention like wearing buttons of their faces, making business cards for Gina’s mother, wearing my Jingle dress-a dance of healing at Amanda’s mother's funeral & utilizing social media at a time when it was new to all of us. I had some incredible moments along the way. I will be sharing more about that in the future! Stay tuned for more about that journey!